42 photos
Jeffery Green (born September 6, 1962 in Owensboro, Kentucky) is an American stock car driver in the NASCAR Nationwide Series. He currently drives in the Nationwide Series for Tri-Star Motorsports in the No. 10.
Green's 1990 Nashville Speedway USA championship led to his first foray in NASCAR. For several years, he raced part-time in the Nationwide Series before thriving as a full-time driver in 1995 and 1996. He then went through a two-year Sprint Cup stint with Diamond Ridge Motorsports and Felix Sabates.
Green returned to the Busch Series in 1999. In three seasons, he won the 2000 championship by 616 points, a series record which stood until 2006, and finished second twice. Green participated in IROC's 25th season in 2001, and has raced with four different Sprint Cup teams since 2002. 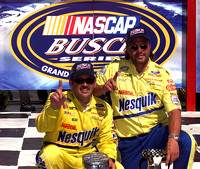