33 photos
Jeremy Allen Mayfield (born May 27, 1969) is a former NASCAR driver who last competed in 2009 due to legal troubles and an indefinite suspension by NASCAR. Prior to 2009, Mayfield drove cars for the Sadler Brothers, T.W. Taylor, Cale Yarborough, Michael Kranefuss, Roger Penske, Ray Evernham, Bill Davis, and Gene Haas. He last drove for his own team, Mayfield Motorsports, before his suspension.
On May 9, 2009, Mayfield was suspended indefinitely as both owner and driver by NASCAR following what NASCAR said was a positive test for methamphetamine. A federal judge weighing the respective harms and evidence lifted the suspension temporarily on July 1, 2009. On July 15, 2009, it was revealed by NASCAR that Mayfield again tested positive for the second time of using methamphetamine. He allegedly failed a random drug test on July 6. On July 24, a federal appeals court overturned the previous injunction Mayfield had been awarded; leaving him suspended from the sport again. 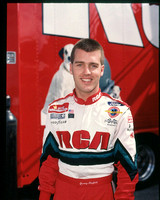