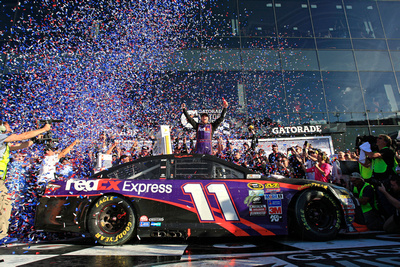 The Daytona Speedweeks have officially come to a close and with that, Denny Hamlin brought home his first Daytona 500 win. It was also the first win of the "Great American Race" since Dale Jarrett's win in 1993, for Joe Gibbs Racing.

It was a close call in the 200 lap race, so close that it has become the closest finish in the events history. Denny Hamlin was able to beat driver Martin Truex Jr. by an amazing 0.010 seconds. Not to mention, it was a powerhouse of Toyota drivers with four of the top five finishers piloting a Toyota Camry.

So, how did the Daytona 500 champion celebrate his win? With a late night trip to the local Steak and Shake with his Joe Gibbs Racing family. It's a tradition that was first started in 1993 after Dale Jarrett's win and is a tradition they hope to keep alive in the race seasons to come. We have a feeling this won't be their last trip to that Steak and Shake!